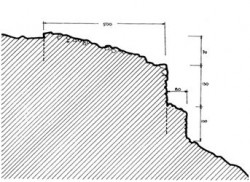 Cross section of the dry-stone wall fortifications
Considering the chronological dating of grave goods found on the neighboring island of Mali Vinik, the settlement of Gradina must have existed since the 9th century B.C., after which it transformed into a Roman town. The prehistoric settlement had elliptic shape, and fortifications encompassing

a 150 meters long and 200 meters wide territory (the territory around the defended area is estimated to take up to 10 acres). Based solely on these facts, this settlement is considered to be one of the largest towns in the Southern Liburnia.

More precisely, it is believed that Colentum was one of the two main maritime centers in the Southern Liburnia in the late Liburnian period. The other center was Iader (Zadar).
Dry-stone wall fortifications of the prehistoric settlement on Gradina were massive, reaching 4 to 5 meters of width in certain places. Prehistoric fragments of ceramics from the late Bronze and Iron Ages were found within the fortified area.

Traces of residential architecture in the shape of small rectangular structures cut in rocks can be seen on the top of the Gradina Hill, as well as on the western and southern slopes of the same hill. The latter ones were much more pleasant for living.